What is the 7th Generation principle and why do you need to know about it? 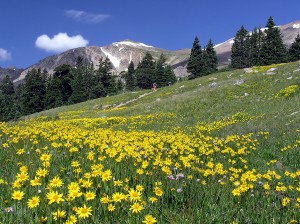 Whenever I mention the 7th Generation principle to most people, they think I’m talking about laundry detergent.

I’m always surprised that more people don’t know the origin of the term, so I felt it deserved a post of its own.

The “7th generation” principle taught by Native Americans says that in every decision, be it personal, governmental or corporate, we must consider how it will affect our descendents seven generations into the future8.  So that the pristine sky, field and mountains in this photo will still be here for them to enjoy.

A generation is generally considered to be 25 years, so that’s 175 years.

It is clearly not embraced by most governments and corporations in the world today. I mean, when was the last time any of us thought about who’s coming along seven generations from now?

The 7th generation principal was so important to Native American cultures that it was codified in the Iroquois Great Law of Peace. To my knowledge, all Native American and indigenous tribes throughout the world embrace this teaching.

Those of us descended from the European culture have generally not given it a second thought.

Long before environmentalists got us thinking about “carbon footprints” and “sustainability,” indigenous peoples lived in balance with the world around them.

It’s even defined in their language:

All these terms mean, “we are all related to, and respect, everything in life.”

Native American tribes didn’t even have a word for “ecology” – respect for the earth was so ingrained in their lifestyle that one word would be too limiting.

The earliest recording of the 7th Generation principle dates back to the Great Law of Peace of the Iroquois Confederacy created in the 12th Century. When our Founding Fathers looked for examples of effective government and human liberty upon which to model a Constitution to unite the thirteen colonies, they found it in the government of the Iroquois Nation, which, at that point, had stood for hundreds of years.

Ironically, in drafting our constitution, our founders left out one of the essential principles of the Great Law of Peace: the 7th Generation principle.

It is ironic, because it is the heart of this very successful model of government – the Iroquois Great Law of Peace has today stood for 1,000 years.

It is the omission of the 7th Generation principle and the role of women in government that led Native Americans to say that, the U.S. copied the Great Law of Peace but didn’t really understand it.

How to live by the 7th Generation principle

To live by this principle, one would ask, prior to any undertaking, how it will affect the land, water, air, animals, birds, plants and the future for our children seven generations into the future?

How does it apply to you?

Think about where you build a house, what kind of car you drive.

Do you throw out or recycle?

What kind of impact are you making on the earth?

What kind of message are you giving your children? Teach them by example.

Here are some specifics:

2. Spay/neuter your pets. The world doesn’t need more homeless dogs and cats; the shelters are overflowing.

3. If you want a pet, please adopt from a shelter.

4. Use organic cleaning products [yes, that would include the 7th Generation brand – that’s where they got the name!] Better yet, make your own. You’d be amazed at what you can do with vinegar and baking soda. Google it.

5. Use cloth diapers or a diaper service, not pampers. The plastic in disposable diapers takes 500 years to break down in a landfill.

6. Buy organic. Yes, organic produce may cost more, but wouldn’t you rather pay the farmer instead of the hospital?

7. Ban plastic from your home; bring your own canvas bags to the supermarket. You can keep them in your car so they’re always handy.

8. Don’t buy “disposable” anything, but if you must, buy paper rather than plastic and plastic rather than Styrofoam, which isn’t recyclable and depletes the ozone layer.

9. Don’t use the dryer – dry your clothes in the sun. There’s nothing like it.

10. Use phosphate-free laundry and dish soap.

11. Use hand soap that comes in bars; plastic bottles of soap are… plastic!

12. Use washable rags, not paper towels, to clean up. What better use for old clothes too stained to wear any more?

14. Plug appliances into power strips and turn them off at night. Most appliances that use electrical power are consuming electricity even when turned off.

15. Shop locally. The travel time, gas and mileage it takes for products to get to big box stores, or for you to get to that store, undermines their savings.

16. Use the train instead of flying for trips under 300 miles.

17. Let your next car be a hybrid or electric. [If you already have one, I salute you!]

18. Compost. It’s a joy to watch the miracle of rotten food turned into glorious soil!

19. Fix things that break, if you can, rather than replacing them.

20. Pull weeds instead of using herbicides. Get your hands in Mother Earth. Again, there’s nothing like it!

22. Xeriscape: plant things that don’t need supplemental water. That means they are native to your area and have adapted to however much rainfall you normally get.

23. Vote for candidates who commit to protecting the earth.

24. Speak up! Tell your political representatives how you feel about issues: Contact Congress, Senate, and the White House.

25. Voice your concerns to merchants about excess packaging and use of plastics.

Please feel free to add your suggestions in the comments below.

Always ask: Will the decisions we make today be beneficial for our descendants?

Remember that everything we do matters. If we live our lives from that idea, we will leave the world a better place.

For a deeper understanding of this principle, watch this brilliant TED talk on “Becoming Great Ancestors.” Just 16 minutes long. Make yourself a cup of tea and enjoy!

One Reply to “7th Generation”